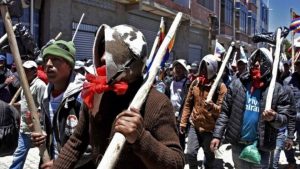 However, Jeanine Áñez did not set a date for the poll.

Mr Morales resigned on 10 November and later sought asylum in Mexico after facing claims of electoral fraud. The death toll since October’s disputed general election has risen to 32 as clashes continue between supporters of Mr Morales and security forces.

Mr Morales accused security forces of committing “genocide” against his indigenous supporters, and requested assistance from the international community. His supporters have been blocking main roads linking the capital La Paz and other major cities, causing widespread disruption across the country.

Ms Áñez said she hoped the proposal – which also seeks the annulment of the original ballot and the formation of a new election tribunal – would help generate “a national consensus”.

Justice Minister Alvaro Coimbra said the hope was for Congress to approve the law “as soon as possible”.

On Tuesday, violence erupted in the city of El Alto as security forces clashed with supporters of Mr Morales who had blockaded a fuel plant for days. The attorney general’s office said eight people died in those clashes.
Speaking at a news conference in Mexico City, Mr Morales decried the behaviour of the security forces. “This massacre… is part of a genocide that is happening in our beloved Bolivia,” he said.

The order was a “crime against humanity”, Mr Murillo said, accusing the ex-president of “terrorism”. “In the coming hours we will file an international lawsuit on this,” he added.

Mr Morales, a former coca farmer, took office in 2006 and became the country’s first leader from an indigenous community. He won plaudits for fighting poverty and improving Bolivia’s economy but drew controversy by defying constitutional limits to run for a fourth term in October’s election.

Pressure had been growing on him since contested election results suggested he had won outright in the first round. The result was called into question by the Organization of American States (OAS), a regional body, which had found “clear manipulation” and called for the result to be annulled.

In response, Mr Morales agreed to hold fresh elections. But his main rival, Carlos Mesa – who came second in the vote – said Mr Morales should not stand in any new vote. The chief of the armed forces, Gen Williams Kaliman, then urged Mr Morales to step down in the interests of peace and stability.

Announcing his resignation, Mr Morales said he had taken the decision in order to stop fellow socialist leaders from being “harassed, persecuted and threatened”. As the deputy Senate leader, Ms Áñez took temporary control of the body last Tuesday after Bolivia’s vice-president and the leaders of the senate and lower house resigned. That put her next in line for the presidency under the constitution.

The appointment of Ms Áñez, an opposition senator, as interim leader has been endorsed by Bolivia’s Constitutional Court. Ms Áñez previously said that her exiled predecessor should face prosecution if he returned to the country.