The centenary of the biggest naval engagement of World War One is being marked by commemorative events. 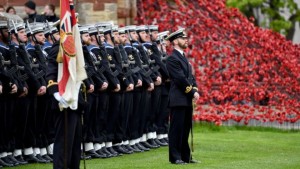 A service at St Magnus Cathedral in Orkney will pay tribute to the 8,648 sailors who died during the Battle of Jutland. A service of remembrance will also take place on board HMS Duncan at Jutland Bank, the site of the battle.

The battle was fought near the coast of Denmark on 31 May and 1 June 1916 and involved about 250 ships. It saw the Royal Navy’s Grand Fleet, based at Scapa Flow in Orkney, clash with the German High Seas Fleet.

Events will continue with a service at Lyness Cemetery on the island of Hoy – the final resting place for more than 450 service personnel who died in the war, including sailors killed at Jutland.

The Duke of Edinburgh had also been due to attend the events, but has pulled out following medical advice. Representatives of all the other nations connected to the battle – Australia, Canada, Ireland, Japan, Malta, New Zealand and South Africa – will also be at the cathedral. The commemoration is being led by the minister of the cathedral, Fraser MacNaughton. He has been be joined by the Royal Navy’s chaplain of the fleet, the Venerable Ian Wheatley, and a German naval chaplain.

In the North Sea, The German ship FGS Schleswig-Holstein will join HMS Duncan at Jutland Bank.

END_OF_DOCUMENT_TOKEN_TO_BE_REPLACED

Militants from the so-called Islamic State have launched a dawn counter-attack as Iraqi government troops push into the city of Falluja. 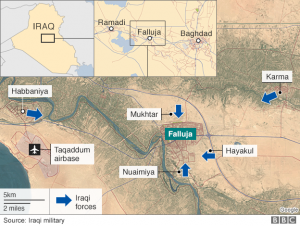 A day after troops advanced through the southern suburb of Nuaimiya, scores of IS fighters attacked them, army officers told news agencies. The army defeated the attackers but suffered casualties, the sources said.

Aid workers are increasingly concerned for the safety of 50,000 civilians said to be trapped in Falluja. Reports speak of people starving to death and of being killed for refusing to fight for IS.

The Iraqi military has urged those remaining to either leave the city or stay indoors but IS is preventing civilians from fleeing.

Falluja fell to IS in January 2014, a key moment in the Sunni Muslim jihadist group’s rise that saw it declare a caliphate across swathes of Iraq and Syria. It is one of two major cities held by IS in Iraq – the other being Mosul.

Lt Gen Abdelwahab al-Saadi, the overall commander of the Falluja operation, told AFP news agency around 100 IS fighters had taken part in the attack and 75 of them had been killed. “They came at us heavily armed but did not use car bombs or suicide bombers,” he said.

But two officers with special forces in the area told the Associated Press news agency that the jihadists had sent out six explosives-laden cars, none of which reached their targets. IS also used snipers and tunnels in the attack, they added, speaking on condition of anonymity.

END_OF_DOCUMENT_TOKEN_TO_BE_REPLACED

At least 23 people have been killed by air strikes on the rebel-held city of Idlib, in north-western Syria, activists say. 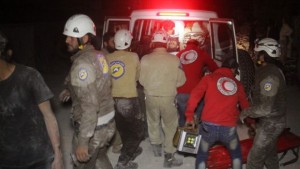 Idlib city and the province of the same name are a stronghold of groups including al-Qaeda-linked Nusra Front. The Nusra Front is excluded from a partial cessation of hostilities brokered by the US and Russia in February to make way for a resumption of peace talks.

The Syrian Observatory said the attacks hit several residential neighbourhoods, and areas near a hospital and a public garden. There were seven children among the dead, it added. Dozens of other people were wounded.

However, a spokesman for Russia’s Defence Ministry, Igor Konashenkov, denied any Russian involvement. “Russian planes did not carry out any combat missions, to say nothing of any air strikes, in the province of Idlib,” a statement said.

The Turkish foreign ministry, in a statement, called on the international community to act swiftly against what it called the “indefensible” crimes of the Russian and the Syrian administration. Russia is a key ally of Syrian President Bashar al-Assad and has carried out an air campaign that it says targets “terrorists”. Turkey has strongly criticised the Russian operations in Syria and opposes the Assad government.

Turkey has hit out at the US over images said to show US special forces in Syria wearing insignia of Kurdish militia, during joint operations against so-called Islamic State (IS). 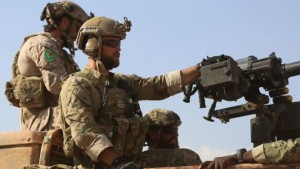 Turkish Foreign Minister Mevlut Cavusoglu called the US “two-faced” and said the practice was “unacceptable”. The images appear to show a US special forces soldier wearing the patch of the YPJ – a Kurdish militia group.

A Pentagon spokesman said troops often blended in with partners for safety.

The series of images, by an AFP photographer, show the US soldiers operating alongside members of the Syrian Democratic Forces (SDF), a US-backed anti-IS Kurdish-Arab alliance dominated by Kurdish fighters. The photographer said the soldiers identified as US special forces refused to talk to journalists but were less wary than usual around the media.

The SDF is largely comprised of the YPG and YPJ, the men’s and women’s wings of the Kurdish People’s Protection Units. The US has publicly acknowledged that its troops are working alongside the YPG, but this is the first time images have emerged of apparent US troops wearing the militia insignia. Turkish authorities accuse the YPG of being linked to the banned PKK Kurdish militant group, which the Turks, along with the EU and US, regard as a terrorist organisation.

END_OF_DOCUMENT_TOKEN_TO_BE_REPLACED

The UK is set to send a Royal Navy warship to the Mediterranean to help tackle arms smuggling in Libya, Prime Minister David Cameron has announced. 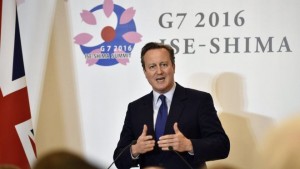 He told the G7 summit in Japan the UK was ready to take an “active leadership role” in helping Libya deal with people trafficking and the migration crisis. The UK already has a survey vessel, HMS Enterprise, operating in the area.

Officials are to seek UN approval for the new warship to seize boats taking arms to so-called Islamic State.

Last week, the new Government of National Accord (GNA) in Libya asked the European Union – which is running a mission, called Operation Sophia, in the area – for more assistance. It requested help in training its navy and coastguard, as well as stopping the trafficking of migrants across the Mediterranean. The GNA is also believed to be considering a request for international ships to operate in Libyan waters.

Speaking in Japan, Mr Cameron said Libya was “a danger to all of us” and the UK would deploy a warship to the area, subject to the UN approving Libya’s request. He said the UK was “working closely” with the EU to tackle people-trafficking in the central Mediterranean.

The UK also plans to send a training team to “assist” with the implementation of plans to help train the Libyan coastguard, he added. Mr Cameron said: “Once the relevant permissions and UN security council resolution are in place I will deploy a naval warship to the south central Mediterranean to combat arms trafficking in the region. “Together these developments will help stabilise Libya, secure its coast and tackle the migration crisis.”

The EU operation – which currently has five ships, including an Italian aircraft carrier and frigates from Spain and Germany – has faced strong criticism. A House of Lords committee published this month said the mission was failing to achieve its aims and does not “in any meaningful way” disrupt smugglers’ boats.