The US military has joined an investigation into a plane that crashed in eastern Afghanistan on Monday. 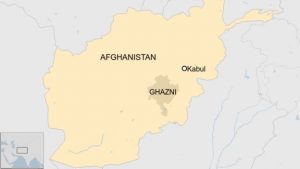 Local officials initially said the aircraft that came down in Deh Yak district, Ghazni province, belonged to state-owned airline Ariana. But the airline denied this, prompting questions about the origin of the aircraft and the cause of the crash.

Hardline Iranian news agency Fars posted footage of what it said was the plane, with US Air Force markings.

The US military uses this type of plane for electronic surveillance over Afghanistan. The village in which the plane came down, south-west of the capital Kabul, is in an area with a strong Taliban presence.

US Army Maj Beth Riordan, a spokeswoman for US Central Command, told Associated Press news agency that it remained unclear whose aircraft was involved in the crash.

Another US defence official told Military Times: “We are aware of the reports and are investigating. At this point, we cannot confirm it is a DOD [Department of Defence] asset.”

After initial speculation that it was an Ariana plane, the airline issued a strong denial, saying it only had two planes in the air and that they were safe.

Mirwais Mirzekwal, chief executive of Ariana, told Reuters: “It does not belong to Ariana because the two flights managed by Ariana today from Herat to Kabul and Herat to Delhi are safe.” Ghazni provincial governor Wahidullah Kaleemzai later told private broadcaster TOLOnews: “There is no exact information on casualties and name of the airline.”

Afghanistan’s aviation body also said that no civilian planes had crashed, and Taliban spokesman Zabihullah Mujahid said that his group had not yet located the aircraft. Ghazni police commander Ahmed Khalid Wardak said that there was no information about casualties, and that it was unclear what had caused the plane to crash. He added that the aircraft had been set on fire.