A man who spoke to Salman Abedi in the foyer of Manchester Arena and thought he could be a bomber said he was “fobbed off” by a security steward. 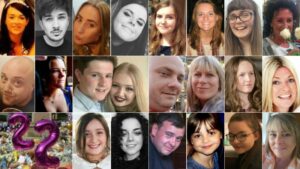 Christopher Wild was at the arena with his partner Julie Whitley to pick up their 14-year-old daughter and her friend after the Ariana Grande concert. He told a public inquiry they had seen a man with a rucksack, apparently hiding, on a mezzanine floor. “I just thought he could be very dangerous,” he said.

Twenty-two people were killed and many more injured when 22-year-old Abedi detonated an explosive as fans left the arena on 22 May 2017.

Mr Wild told the inquiry the couple had told the girls they would meet them at the end of the concert in the foyer area, at the top of steps leading up to the mezzanine level.

He said they had seen a man with a rucksack as they had walked across the mezzanine and his partner said to him: “It’s a kids’ concert, why should he be sat there with a massive rucksack out of sight of everyone? It’s just very strange.”

Mr Wild said: “I started to think about things that happened in the world and I just thought he could be very dangerous.” He said he thought he might “let a bomb off” so decided to speak to Abedi despite feeling “a bit bad in myself challenging him”.

He told him: “It doesn’t look very good you know, what you see with bombs and such, you with a rucksack in a place like this, what are you doing?” Abedi responded: “I’m waiting for somebody mate. Have you got the time? What time is it?”

Mr Wild said he walked away from Abedi, and approached Showsec steward Mohammed Agha, who was standing on the main floor of the foyer, below the mezzanine. He told the inquiry: “He said he already knew about him, that was about it really.”

Mr Greaney said: “In your statement you said ‘I felt I was being fobbed off really’ – is that still how it feels?” Mr Wild said: “Yes, it was as if he had more important things to deal with – but in no way do I blame him because the guy was already in there, there was nothing more he could do.” The hearing was told Ms Whitley was badly hurt in the explosion. They managed to find Mr Wild’s daughter and her friend, and drove to hospital.

Ms Whitley told the inquiry she saw Abedi had a “massive” rucksack, which was packed full and looked solid and she thought he might have been a “dodgy merchandiser”. She said after Mr Wild spoke to the security steward, she was reassured the man must have been a merchandiser, and put it out of her mind.

The public inquiry, scheduled to last into next spring, is looking at events before, during and after the attack.