A man has died in a shooting in north London. 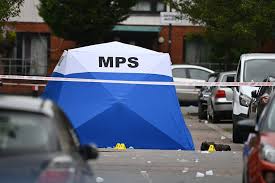 The man, believed to be aged in his 20s, was found with a gunshot wound in Windrush Road, near Harlesden, at about 03:00 BST. Police officers provided first aid until paramedics arrived but the man was pronounced dead at the scene. The Met is contacting his next of kin.

A murder investigation has been launched and inquires are under way. No arrests have been made.

Windrush Road is in the area less than a mile away from where a two-year-old boy was shot in Energen Close on 3 June. A few miles away in Brent, there have been four other murder investigations launched in 2020, including the deaths of sisters Bibaa Henry and Nicole Smallman who were fatally stabbed in Fryent Country Park in June.

So far this year there have been more than 65 murder investigations launched across London. Nine of those homicides have involved a firearm and 36 have been caused by a stab wound.