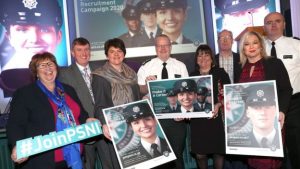 It comes six days after the deputy first minister said she and party colleague Gerry Kelly were threatened.

Mr Kelly said on Tuesday that he had been checking under his car for a bomb “for a considerable period of time”. “There’s adults in our house now with children and I told them to be very careful,” said the North Belfast MLA.

Mrs O’Neill said on Monday that she had been told an attack on a Sinn Féin member “could happen anywhere” in Northern Ireland. “This is literally a threat against thousands of Sinn Féin members and their families in the north,” she added.

The party has come under threat after its attendance at the recent opening of the Police Service of Northern Ireland’s (PSNI) recruitment campaign.

The PSNI said it condemned threats “against anyone in our society”, adding that it recognised the “alarm and distress they cause”.

“If we receive information that suggest individuals may need to review their security we will take steps to inform them immediately,” said the PSNI. “We will never ignore anything that could place individuals at risk.” Mrs O’Neill urged Sinn Féin members to be vigilant and called on those behind the bomb threat to lift it. She said: “Following the recent launch of a PSNI recruitment campaign, police have told Sinn Féin that persons aligned with the dissident republican group the so-called New IRA plan to attack a Sinn Féin member using an under-car explosive device.

“This is not the first time this particular group have made threats against Sinn Féin members and the PSNI is taking this threat very seriously.”
The Mid Ulster MLA said the threat “comes at a time when the debate on Irish unity is centre stage”. “The response of these so-called republicans is to plan attacks on Sinn Féin members,” she said. “Sinn Féin will not be deterred from pursuing our objective of a united Ireland. “This armed group must withdraw its threat immediately. There is no room for the existence of armed groups. They should disband.”

Her party colleague, Gerry Kelly, told Good Morning Ulster that the New IRA was also behind last week’s threat to himself and Michelle O’Neill.

The name of the group behind the threat was not disclosed by the party at the time.

Mr Kelly said that by stating any member could be now be targeted, the New IRA was “deliberately setting out to intimidate” the party,