A police officer was stabbed with a machete in a “frenzied” attack as he tried to stop a van in Leyton, east London. 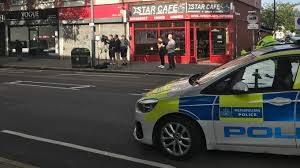 The officer, aged in his 30s, suffered multiple injuries but managed to use his Taser on the suspect. His colleague then stepped in to arrest the man following the stabbing, shortly after midnight. Police said the injured officer was expected to recover from his injuries.

Det Ch Supt Richard Tucker, of the Met, said he was stabbed “in the head and round the body” and was being treated at the Royal London Hospital in Whitechapel. He described the attack as “frenzied, unprovoked and shocking”.

The uniformed officers had attempted to stop the van for having no insurance on the junction between Coopers Lane and Leyton High Road. When they spoke to the driver he became “quite aggressive” then returned to his van before “a violent struggle ensued”, Det Ch Supt Tucker said.

The injured PC is a patrol officer who has been with the Met for about 10 years.

Det Ch Supt Tucker described him as “an amazing police officer”. “He told me he was okay but that’s the type of character he is,” he said.

Insp Julia James, from North East Command Unit, said: “This was a sudden and brutal attack on a uniformed officer carrying out their duties. “What began as a routine vehicle stop has transformed very quickly and unexpectedly into an unprovoked attack with a weapon.”

A man, aged in his 50s, was arrested at the scene on suspicion of causing grievous bodily harm and taken to an east London police station for questioning.

In the wake of the attack, pictures posted on social media showed a heavy police presence in the Leyton area. Police said there was nothing to suggest the incident was terrorism-related.

The van stopped by the officers has been taken away from the street for forensic examination.

Home Secretary Priti Patel tweeted she was “absolutely horrified by the shocking stabbing”, while Sadiq Khan sad he was “utterly appalled by this sickening attack”. “This was an attack on a police officer, who showed tremendous bravery by continuing to defend others even whilst being attacked himself,” London’s mayor said.

Ken Marsh, chairman of the Met Police Federation, described the attack “horrific news”. “Police officers should be going home at the end of their shifts, not to hospital,” he said.

The Met has urged any witnesses to the attack to come forward.