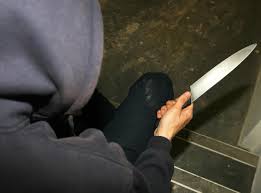 Robbery offences were also up – for the fourth year running – with an annual increase of 12%, to 83,930 offences. There were 670 cases of murder and manslaughter in 2019, excluding Greater Manchester Police, which is up 15 on the year before. The total includes 39 people whose bodies were found in a lorry in Grays, Essex, in October. Overall trends in crime remain broadly stable, according to the ONS, with the Crime Survey for England and Wales – which includes offences that are not reported to police – suggesting there was a fall of 5% compared with 2018.

Home Secretary Priti Patel described the fall as “encouraging” and a “step in the right direction”. She added: “I will continue to give the police the stop and search powers, funding and extra officers they need to keep our families, communities and country safe.” The proportion of suspects charged with a crime in England and Wales, meanwhile, has fallen to a new record low.

Home Office figures show that only one in every 14 offences led to court proceedings – less than half the rate five years ago. The charging rate has been in decline almost continuously since 2014-15, when changes were made to the collection of the data.

The percentage of crimes in which suspects were cautioned has also fallen, to 1.3% from 4.6% in 2014-15. The main reason for the decline appears to be an increase in the number of victims who are co-operating with police investigations and prosecutions.

Last year, that figure had risen to 22.9%. The lowest charging rate was for rape, with just one in every 66 offences recorded by police leading to a prosecution, or 1.5%. In more than 40.6% of rape cases the victim did not support action being taken.