Fifteen people have been treated for breathing difficulties after an unknown substance was sprayed inside branches of Pizza Hut, Tesco and McDonald’s. 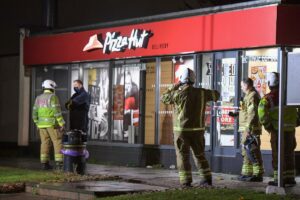 Emergency services were called to The Arcade in Upper Gornal, Dudley, shortly after 19:00 BST on Tuesday. One person was taken to hospital, but none have suffered any lasting effects, West Midlands Police said.

Forensics experts are working to establish the nature of the substance, the force added.

West Midlands Ambulance Service said fourteen people were discharged at the scene while one man was taken to Russells Hall Hospital for further assessment.

A Tesco spokesperson said its Dudley Gornal Express store was temporarily closed for a deep clean but has reopened, and staff are helping the police and fire service with their investigation. Pizza Hut said none of its staff or customers were injured and it was working with the relevant authorities.

Police have urged anyone with information to come forward.