Two women, believed to be mother and daughter, have been killed in linked attacks in Ayrshire before a man died in a road crash. 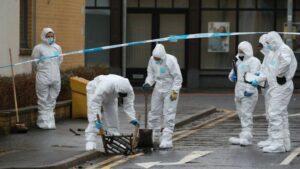 NHS worker Emma Robertson Coupland, 39, was found injured in the car park of University Crosshouse Hospital in Kilmarnock at 19:45 on Thursday.

Around 20 minutes later Nicole Anderson, 24, was fatally stabbed on Portland Street, about two miles away. Steven Robertson, 40, died in a road crash south of the town, at 20:30.

Police Scotland said it is not looking for anyone else in connection with the incidents – which led to a three-hour lockdown of the hospital – and there is no ongoing threat to the public.

Ch Supt Faroque Hussain said: “A number of locations remain cordoned off as officers continue to conduct inquiries. “We are working to confirm the full circumstances of what has happened.” He urged anyone with information about the incidents, which unfolded over a 45-minute period, to come forward.

Ch Supt Hussain added: “Understandably, people will be shocked by what has happened. “We are still in the process of establishing the full circumstances, however, I would like to reassure people that there is no wider threat to the community.”

Ms Coupland was treated in the hospital car park but died at the scene. Her daughter was attacked about 20 minutes later and was taken to University Crosshouse Hospital but later died from her injuries.

The fatal road crash occurred on the C50, a minor road between the B7036 and the A76, about 12 miles south of Kilmarnock. Mr Robertson was pronounced dead at the scene.

Ambulances were diverted to University Hospital Ayr as police dealt with the unfolding events until the three-hour lockdown was lifted shortly before 23:00. On Friday morning, the hospital’s A&E department and main entrance were open and running as normal while two police vans full of officers remained outside with police tape around part of the car park.

Dr Crawford McGuffie, the medical director of NHS Ayrshire and Arran, said police had confirmed the risk to patients, staff and visitors to the hospital was minimal. He added: “There remains a large police presence on the grounds of the hospital. “We would like to reassure anyone coming to the hospital, in particular to any patients or staff coming on shift, that Police Scotland have confirmed it is safe to do so. “However, if you are worried, please speak to the onsite Police Scotland officers.”

First Minister Nicola Sturgeon tweeted: “Dreadful news. My thoughts are with the bereaved. Thinking too of everyone at Crosshouse Hospital, already dealing with the tough circumstances of Covid. I’m also grateful to our emergency services. Please continue to follow @policescotland advice.”

During the Scottish government’s daily coronavirus briefing, Deputy First Minister John Swinney said his thoughts were also with the family and friends of those who died. He added: “A tragedy like this would be impossible to understand at any time but, after the events of the past year, it is particularly shocking that such an incident has taken place at an NHS hospital.”

Downing Street said Boris Johnson’s thoughts were with all those involved.

A Number 10 spokesman said: “The prime minister’s thoughts are with all those involved and he thanks the police and the healthcare staff for their response.”

East Ayrshire Council leader Douglas Reid said he was “shocked and saddened” by the tragic events. He added: “In East Ayrshire we are proud of our community spirit and community resilience, but I know the events of last night will have had a devastating impact on several families in our communities and our heartfelt thoughts go out to them this morning.”