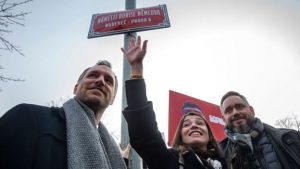 The newspaper also alleges that the matter came up at a meeting between Czech Foreign Minister Tomas Petricek and Russian Ambassador Alexander Zmeyevsky. Zuzana Stichova, Czech foreign ministry spokeswoman said they would “not comment on the leaks published in the media”, adding that they worked with the security services and “react adequately to all advice and information we receive about potential threats”. “The fact remains that several weeks ago an appropriately accredited Russian diplomat returned to Prague from a business trip and he was met at the airport by his colleagues,” she said.

Both Mr Hrib and Mr Kolar have spoken out against Mr Putin’s government in recent months.

Mr Hrib backed plans to rename the square outside the Russian embassy to honour Boris Nemtsov, a Russian opposition leader who was killed near the Kremlin in 2015.
Russia has since changed the address of its embassy to nearby Korunovacni Street, Czech media reports.

Several other cities – including Washington DC in the US and Vilnius in Lithuania – have renamed areas outside Russian embassies after Nemtsov.