A man who stabbed a police dog in the head in a “gratuitous” attack while high on drugs has become the first person to be jailed under Finn’s Law. 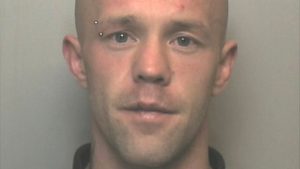 Daniel O’Sullivan, 29, admitted attacking Audi as his handler tried to make an arrest in Stoke-on-Trent. O’Sullivan, of Liverpool, was the first person charged under the Animal Welfare (Service Animals) Act 2019.

Judge Paul Glenn said the attack on 1 July was “plainly premeditated” and jailed O’Sullivan for 21 months.

O’Sullivan, from the Litherland area, also admitted five counts of assaulting police officers and two of possessing offensive weapons. A member of the public called police after being concerned about O’Sullivan’s behaviour near the Potteries shopping centre in Quadrant Road, Hanley town centre, at about 14:15 BST.

Howard Searle, prosecuting, said he was seen “bouncing up and down, punching the air with the knife, making practice lunges”.

Several police officers arrived, including PC Karl Mander and Audi, and O’Sullivan was found with a 4in lock-knife in one hand and a glass bottle in the other. The court heard O’Sullivan was high on cocaine and the synthetic drug known as monkey dust at the time.

Officers ordered O’Sullivan to drop the knife, but he refused and threw a glass bottle at them, at which point the police dog was released. O’Sullivan stabbed Audi near the eye and tried to stab him again, before being chased by officers, when he was tasered and fell to the floor. In the scuffle he also kicked an officer in the head.

Sentencing O’Sullivan Judge Glenn said he had been “screaming threats, including that [he] would stab the dog handler”. The judge said it had been called a “gratuitous” and “plainly premeditated” assault on Audi and O’Sullivan had gone on to be aggressive to hospital staff when he was admitted for treatment. “O’Sullivan was out to seriously hurt PD Audi and it was lucky that he wasn’t blinded or killed as a result of his injuries,” Det Insp Stephen Ward said.

Audi has since returned to work with Staffordshire Police and has “recovered well”, the force said. PC Mander said last month Audi had had “lots of rest and TLC”, adding there did not seem “to be any lasting damage to him”.

O’Sullivan was also charged with one count of affray, which he denied. O’Sullivan – who had previous convictions for attacking police, battery and affray – was the first person to be charged under the Animal Welfare (Service Animals) Act 2019 – also known as Finn’s Law – since it was introduced.

Before the act was passed, attacks on police dogs were treated as criminal damage.