Kosovo President Hashim Thaci has resigned from office, announcing that a special court at The Hague is indicting him for war crimes. 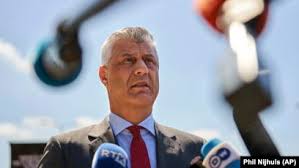 There was no immediate confirmation from The Hague. But a special prosecutor submitted accusations in June covering Kosovo’s 1998-9 independence war against Serbia. Mr Thaci denies any wrongdoing.

His decision comes hours after veteran Kosovo politician Jakup Krasniqi was arrested and taken to the Hague.

Mr Krasniqi, a 69-year-old former spokesman for the Kosovo Liberation Army (KLA) who is also a former Kosovo president, was detained in a raid on his home by EU police. He faces charges of war crimes and crimes against humanity.

The Kosovo Specialist Chambers (KSC) in The Hague is investigating allegations that former leaders of the KLA committed war crimes and crimes against humanity in the late 1990s. The accusations levelled against Mr Thaci by the special prosecutor at The Hague were passed to a KSC judge earlier this year ahead of a possible indictment. The prosecutor accused the Kosovo leader of being “criminally responsible for nearly 100 murders”, torture and enforced disappearances.

Mr Thaci said he was stepping down to ensure he would not face trial while serving as president. He said his resignation would “defend the integrity of the state”, and called on people to remain calm.

Amnesty International has welcomed the news. “The indictment brings hope for thousands of victims of the Kosovo war who have waited for more than two decades about the horrific crimes committed against them and their loved ones,” Jelena Sesar, Balkans Researcher at Amnesty International said in a statement.

Mr Thaci has been in power in Kosovo since the end of its independence war, which cost more than 10,000 lives and only ended after an air campaign by Nato, a defence alliance in the North Atlantic. Kosovo declared its independence in 2008. It has been recognised by the United States and major European Union countries, but Serbia, backed by its powerful ally Russia, Kosovo’s ethnic Albanian majority view the KLA, which rebelled against Belgrade when Kosovo was a province of Serbia, as heroes.

Reconciliation between the Albanians, most of whom support independence, and the Serb minority, remains elusive. The KSC was set up in The Hague in 2015 to handle cases of alleged crimes by KLA members during the war. It operates under Kosovo law but is staffed by international judges and prosecutors.

Parliamentary speaker Vjosa Osmani will act as president until a new leader is elected.