Footage of Manchester Arena bomber Salman Abedi watching music fans arrive for a Take That gig days before his attack has been shown to a jury. 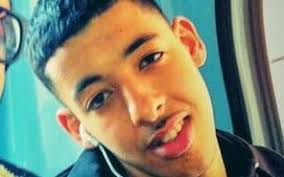 Abedi can be seen looking at long box office queues, just yards from the spot where, four days later on 22 May 2017, he killed himself and 22 others. Hashem Abedi, 22, is on trial at the Old Bailey in London, accused of helping his brother plan the attack. He denies 22 murders, attempted murder, and conspiring to cause explosions.

The attempted murder charge encompasses the scores of people who survived the attack, which happened at the end of an Ariana Grande concert.

The jury was shown CCTV footage in which Salman Abedi travels to the Arena venue, spending more than a minute in the City Rooms section where crowds can be seen milling around him. He then leaves for the nearby Arndale shopping centre, where he buys four nine-volt batteries and a large blue Kangol suitcase, used to transport his bomb-making equipment to his Manchester city centre flat.

Earlier he was seen leaving the flat in Granby Row at about 18:00 BST. The hooded figure, wearing jogging bottoms and white trainers, was seen moving through rush-hour traffic. Abedi, then aged 22, also swaps his Sim card between phones and takes an untraced international call during the visit, where he walks the perimeter of the Arena venue before going inside to the City Rooms.

Jurors heard that he took the suitcase to Devell House, a block of flats in Rusholme, south Manchester, the next day.

The prosecution said that on 14 April, the Abedi brothers left a Nissan Micra outside the flat and that the vehicle had been used to store bomb-making chemicals and equipment until Salman Abedi returned from Libya to carry out the final stage of the plan. There Salman Abedi loads the suitcase and is seen struggling to drag it up the steps at his city centre apartment, where the prosecution alleged he assembled his device.

Hashem Abedi has told the jury he is not an extremist and had no idea of his older brother’s plan.