Julian Assange will remain in jail as he continues to fight against extradition to the USA. 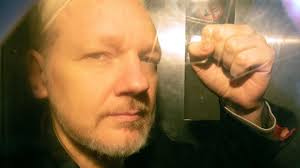 District Judge Vanessa Baraitser said there were substantial grounds to believe he would abscond. On Monday, she ruled the Wikileaks founder cannot be extradited to the USA because he might kill himself. The USA is now appealing that decision – and had opposed releasing the 49-year-old from a maximum security prison before the case is heard.

Mr Assange, who was wearing a dark suit and face mask, was not seen to react to the decision at Westminster Magistrates Court. He’s been held in prison since 2019, after hiding for seven years inside the Ecuadorian Embassy to avoid extradition.

US prosecutors want to put him on trial for hacking and disclosing classified information – including the identities of informants who were helping intelligence agencies in Afghanistan, Iraq and elsewhere.

In her ruling, DJ Baraitser said Mr Assange still had the incentive to abscond. “He is willing to flout the order of this court,” she said. “As a matter of fairness, the US must be allowed to challenge my decision and if Mr Assange absconds during this process they will lose the opportunity to do so.”

During the bail application, Mr Assange’s barrister Ed Fitzgerald QC said his client had been offered a London home by a supporter, where he could be with his partner and their two young children – but also compelled to remain under the strictest bail conditions. “Your decision [on Monday] changes everything and it certainly changes any motive to abscond,” said Mr Fitzgerald. “On any view… [Mr Assange] would be safer isolating with his family in the community, subject to severe restrictions, than if he were in Belmarsh which has, very recently, had a severe outbreak…(of coronavirus). He wishes to live a sheltered life with his family.”

But Clair Dobbin, for the USA, told the court Mr Assange had the “resources, abilities and the sheer wherewithal” to secretly arrange a flight to another country. “[Mr Assange] regards himself as above the law and no cost is too great, whether that cost be to himself or others,” said the barrister.

Julian Assange’s partner, Stella Moris, was among a large group of his supporters who had gathered at court.

“This a huge disappointment,” she said. “Julian should not be in Belmarsh prison in the first place. I urge the [US] Department of Justice to drop the charges and the President of the United States to pardon Julian.”

District Judge Baraitser blocked Julian Assange’s extradition on Monday, ruling that that while he had a case to answer, he was so mentally unwell that the US authorities could not guarantee he would not kill himself once inside a maximum security prison in the country.

The USA’s appeal against that ruling – which will go to more senior judges later this year – will challenge that finding.