A Jewish student has been badly injured in an attack by a man wielding a shovel as he entered a synagogue in the northern city of Hamburg. 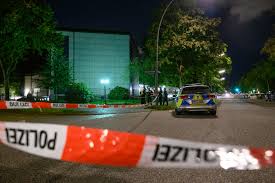 The 26-year-old sustained severe head injuries and was taken to hospital, according to local media. The suspected attacker was arrested and police confirmed they were investigating the case as attempted murder with anti-Semitic intent.

The incident took place almost one year after a gunman attacked a synagogue in the city of Halle during Yom Kippur, killing two.

The victim of Sunday’s attack was entering the synagogue when he was repeatedly hit on the head by the attacker. The suspect, 29, was dressed in military clothes and had a hand-drawn swastika in his pocket, police said.

Police said the suspect was in a confused state when he was detained, reportedly by officers guarding the synagogue. “The current assessment of the situation suggests this is an anti-Semitic motivated attack,” a statement from police and prosecutors said. They added that the case was being treated as “attempted murder with grievous bodily harm”.

Germany’s Justice Minister Christine Lambrecht condemned the attack. “The hatred against Jews is a disgrace for our country,” she said.

German Jews have watched with the alarm the rise of the far-right Alternative for Germany (AfD) which since 2017 has been the main opposition party. AfD is openly against immigration but denies holding anti-Semitic views, even though a number of their political figures have drawn criticism for statements on the Holocaust.

Germany is home to the third-largest Jewish population in western Europe.