Police in Dublin have been given a further 24 hours to question an Irish citizen who became an Islamic State bride. 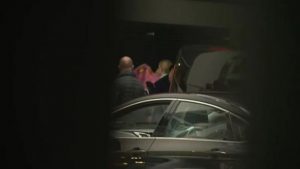 Lisa Smith and her daughter were deported from Turkey and arrived in Ireland on Sunday. She was arrested on suspicion of terrorist offences on arrival by gardaí (Irish police).

A former member of the Irish Defence Forces, Ms Smith remains in custody at a south Dublin Garda station.

Plans have been made for the care of her two-year-old daughter, who was born in Syria but is an Irish citizen. She is currently being detained under the provisions of Section 30 of the Offences against the State Act, as amended.

She said was not involved in fighting and did not train girls to become fighters. She also claimed she had been visited more than once by the FBI for questioning, and agents had taken her fingerprints and DNA.

Ms Smith had been living with her daughter in a Syrian refugee camp.

The taoiseach (Irish prime minister) Leo Varadkar had previously said she would “certainly” be investigated if she returned to Ireland.