Iran has confirmed that two Tor-M1 surface-to-air missiles were fired at the Ukrainian airliner that crashed near Tehran earlier this month. 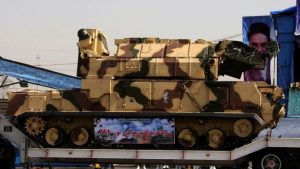 The Civil Aviation Organisation of Iran (CAOI) said the Russian-made missiles were launched from the north. But it added that “the impact of these missiles” was still being assessed.

Iran’s armed forces have said they fired at Ukraine International Airlines flight PS752 by mistake on 8 January, killing all 176 people on board.

For the first three days after the tragedy, they denied any responsibility and the CAOI suggested there had been a technical failure. But as evidence mounted, the Revolutionary Guards’ Aerospace Force said the operator of an air defence system had mistaken the Boeing 737-800 for a US cruise missile and fired at it.

Iran’s air defences had been on high alert at the time because the country had just fired ballistic missiles at two US bases in Iraq in retaliation for the killing of top Iranian general Qasem Soleimani in a US drone strike in Baghdad. In its second preliminary report on flight PS752, the CAOI identified the surface-to-air missiles fired at flight PS752 as coming from a Tor-M1 system, which Nato calls the SA-15 “Gauntlet”.

However, the report stopped short of blaming the missiles for the crash, saying “the impact of these missiles on the accident and the analysis of this action is under investigation”.

Security camera footage circulated on social media had suggested that the plane was struck by two missiles within 23 seconds, shortly after taking off from Imam Khomeini International Airport. Two unverified photographs purportedly taken near the crash site, also shared on social media, had meanwhile appeared to show the debris of an anti-aircraft missile.

The CAOI report also said Iranian investigators had found it “impossible” to read the plane’s flight data and cockpit voice recorders – commonly known as the “black boxes” – because they were too advanced.