A car has been driven into a crowd at a carnival parade in the western German town of Volkmarsen. 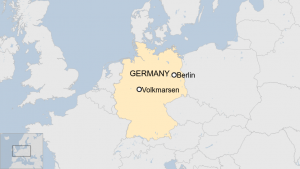 At least 10 people are thought to have been injured, local media report. A police spokesman said the driver had been detained.

Eyewitnesses quoted in the German media say the driver accelerated toward the crowd and appeared to target children. The motive and nature of the incident are as yet unclear. Emergency workers are at the scene.

Local reports say a silver Mercedes drove through plastic barricades set up for the parade and into a group of people at about 14:30 local time (13:30 GMT).

In a Twitter post, police called on anyone with pictures or videos of the incident to send them to officers, and urged people not to speculate about a motive.

The incident took place during celebrations for Rosenmontag, or Rose Monday – a carnival day celebrated in some parts of Germany, as well as parts of Austria, Belgium and Switzerland. Schools are often closed on the day, although it is not a national holiday in Germany. Authorities have cancelled all carnival parades in Hesse “as a precaution”, police tweeted.