At least 300 people have been killed in a fresh wave of intercommunal fighting in South Sudan, authorities say. 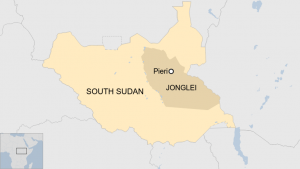 Dozens of homes in Jonglei state were destroyed, warehouses belonging to aid groups were raided, and women and cattle were abducted. Three aid workers were among those killed.

A treaty aimed at ending the country’s six-year civil war was signed in February, but intercommunal violence has erupted a number of times since. Some 800 people are believed to have died in such clashes since February.

The latest outbreak of violence between pastoralists, who rely on livestock, and farm workers began on Saturday in the north-eastern town of Pieri, forcing thousands of people to flee to the bush.

Health workers says many of the victims have gunshot wounds. Some of the injured have been airlifted to the capital, Juba, for treatment. One of the aid workers killed was from Médecins Sans Frontières.

Peacekeepers were interviewing survivors in the town when fighting broke out, the UN mission said in a statement.

David Shearer, the UN’s special representative for South Sudan, said that the violence between the two groups must stop. “While politically motivated conflict has reduced in South Sudan, intercommunal fighting has increased, causing massive suffering for families who are trying to rebuild their lives after the devastation caused by years of civil war,” he said.

About 380,000 people were killed in South Sudan’s civil war.

A peace agreement was reached in February by President Salva Kiir and rebel leader Riek Machar, who formed a government of national unity. But outbreaks of inter-ethnic fighting have continued, threatening the fragile treaty.

Security agencies have said they have recovered hundreds of illegal firearms – including rifles, rocket-propelled grenades and hand grenades – from the warring communities.