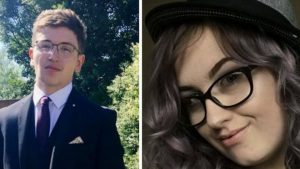 The meeting followed a spate of fatal teen stabbings which has prompted debate about falling police numbers.

Durham’s Chief Constable Mike Barton said he was “heartened” by the meeting while the chief constable of Merseyside Police said the talks were “very good”.

Ahead of the meeting, spokespeople from a number of police bodies called for funding for more officers. Metropolitan Police Commissioner Cressida Dick has said there is “obviously” a link between violent crime and falling police numbers. But Prime Minister Theresa May has insisted there is “no direct correlation”.

It comes after two 17-year-olds were killed in separate stabbings in London and Greater Manchester at the weekend. Jodie Chesney was killed in an east London park as she played music with friends, and Yousef Ghaleb Makki was stabbed to death in the village of Hale Barns, near Altrincham.

Speaking about Yousef’s death, Greater Manchester Mayor Andy Burnham said he supported an increase in the use of stop and search by police, even though it was “controversial”. “If there are more young people carrying knives, it follows there needs to be more people apprehended,” he said.

Meanwhile, the Metropolitan Police said a man had been arrested in Leicester in connection with the murder of Jodie. Jodie’s grandmother, Debbie Chesney, wrote on Facebook: “We don’t want anyone else to go through what our family is suffering right now. This has to stop, there are too many young people having their lives cut short by needless violence.”

In Lancashire, six people have been arrested over a gang attack at a sixth form college. A machete was found near Runshaw College in Leyland, following Monday’s incident.
Theresa May told a Cabinet meeting on Tuesday that the killings of Jodie and Yousef were “absolutely appalling”. Her official spokesman said the Home Office would co-ordinate an urgent series of ministerial meetings and engagements to accelerate the work government was doing to support local councils and police. Mrs May said the problem would require “a whole-of-government effort, in conjunction with the police, the wider public sector and local communities”.

Meanwhile, Labour leader Jeremy Corbyn criticised the prime minister for saying there was no direct link between the cut in police numbers and the increase in violent crime.

In a video posted on Tuesday, he said young people “shouldn’t pay the price for austerity with their lives”.