Russia has paid tribute to a former Soviet intelligence officer it credits with uncovering a Nazi plot to kill the Allied leaders Churchill, Stalin and Roosevelt during World War Two. 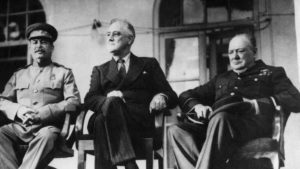 Goar Vartanyan died on Monday at the age of 93. She was married to Soviet spy Gevork Vartanian, who died in 2012.

Without the pair “the history of our world could have been different”, Kremlin spokesman Dmitry Peskov said. “These are people who left their mark on the history of mankind.”

Born in what was then Soviet Armenia in 1926, Vartanyan moved to Iran in the 1930s. At 16 she joined an anti-fascist group led by her future husband, who was already working as a spy. They allegedly exposed hundreds of Nazi agents in the country. The group was given responsibility for securing a 1943 conference in the Iranian capital, Tehran, where the British, Soviet and American leaders met to discuss their strategy for fighting the war. The group are said to have uncovered a plot – known as Operation Long Jump – to kill the “Big Three” Allied leaders and arrested the would-be Nazi assassins.

The plot was allegedly commanded by the infamous Austrian-born Nazi commando Otto Skorzeny but was foiled after transmissions were intercepted by Soviet operatives. However, Skorzeny later wrote in his memoirs that the plot never existed.

Goar and Gevork Vartanyan moved to the Soviet Union in 1951 and later worked together as spies posted overseas under deep cover – as part of the so-called “illegals” programme – from 1956 to 1986, Russia’s SVR foreign intelligence agency said. Her code name was Anita and his Anri.

Mr Peskov, spokesman for President Vladimir Putin, said Russia’s leader – a former intelligence agent – knew the pair well. “He is a Hero of the Soviet Union! She is the heroine of all his achievements! He passed away first. She passed away today,” the SVR said in a statement.