After a trial lasting more than five years, the leadership of Greece’s neo-Nazi party has been convicted of running a criminal organisation. 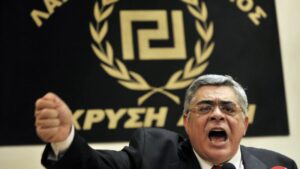 Big crowds gathered outside the court in Athens as the judges gave verdicts on 68 defendants. Golden Dawn secured 18 MPs in 2012, as Greeks were battered by a financial crisis. The criminal inquiry into the party began with the murder of an anti-fascist rapper in 2013.

Some 2,000 police were deployed around Athens Appeals Court as thousands of protesters demanded long jail terms, carrying banners that read “fear will not win” and “Nazis in prison”, Greek media reported.

Tear gas was fired into the crowd as some of the protesters clashed with police and threw petrol bombs. Eleven of the defendants were in the court when the verdict was read out, journalist Dmitris Parras said, along with 50 attorneys and 50 journalists.

Greek President Katerina Sakellaropoulou said the verdict was an important day for the country’s democracy. Hundreds of witnesses gave evidence in the trial, which was delayed this year by the Covid-19 pandemic.

At the centre of the trial are Golden Dawn leader Nikos Michaloliakos and 18 ex-MPs who were elected in 2012 when the neo-Nazi party came third in national elections on an anti-immigrant, nationalist platform. Golden Dawn no longer has any MPs in parliament. After they won almost 7% of the vote in May 2012, emboldened supporters attacked political opponents and migrants.

Golden Dawn supporter Giorgos Roupakias had already confessed to the murder of rapper Pavlos Fyssas. The musician was chased down by thugs and stabbed in Piraeus in September 2013. As the verdict was delivered, Fyssas’s mother Magda cried out, “Pavlos made it, my son!”.

The key verdict on Wednesday was that Golden Dawn – Chrysi Avgi in Greek – was a criminal group. Its leadership was found guilty of running it. They included Michaloliakos and six former MPs – Ilias Kasidiaris, Ioannis Lagos, Christos Pappas, Artemis Matthaiopoulos, Ilias Panagiotaros and Giorgos Germenis. The other ex-MPs were found guilty of joining a criminal organisation. The three judges, led by Maria Lepeniotou, were due to deliver sentencing later.

Nikos Michaloliakos founded the movement in the mid-1980s and was admirer of Nazism and a Holocaust denier, giving the Hitler salute at party rallies. But he had always denied any knowledge of the Pavlos Fyssas murder. When police raided his home in 2013, they found weapons and ammunition. Golden Dawn officially denied being a neo-Nazi movement, but its badge closely resembled a swastika, some senior members praised Adolf Hitler, and the clothing of choice at anti-immigrant protests was black T-shirts and combat trousers.

Witnesses told the trial that members were trained to handle weapons and used Nazi symbols.

Last December, chief prosecutor Adamantia Economou prompted uproar, with a call for the party officials to be cleared, arguing there was no evidence they had any part in planning or carrying out the series of attacks. There has been disgust at Golden Dawn across the political spectrum in Greece. The verdict was praised as “just” and “historic” by Prokopis Pavlopoulos, who was president of Greece until earlier this year.

Centre-left political leader Fofi Gennimata said the decision sent a strong message to Europe that “fascism has no place in our lives”.

At the weekend, centre-right Prime Minister Kyriakos Mitsotakis wrote of Greece’s “traumatic, painful, and unfortunately, very bloody” experience of Golden Dawn, while ultimately praising the country’s democratic success in getting rid of it both in parliament and daily life.

Left-wing opposition leader Alexis Tsipras was adamant that “members of this criminal gang must go to prison”. Nils Muiznieks of Amnesty International said the trial had been a serious test for Greek justice but that a “clear and unequivocal message” could help deter future racist violence.

Meanwhile, the Jewish cemetery in Athens was daubed this week with anti-Semitic graffiti and Nazi slogans, prompting condemnation from Greek ministers and the Jewish community.