Iraqi government forces have retaken the main government compound in the city of Falluja from Islamic State (IS) militants, a top commander has said. 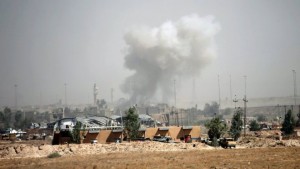 They earlier reportedly recaptured several areas to the south and east.

Falluja, only 50km (30 miles) west of Baghdad, has been held by IS longer than any other city in Iraq or Syria. The jihadist group overran Falluja in January 2014, six months before it seized control of large parts of northern and western Iraq.

Government forces launched the offensive to recapture Falluja almost four weeks ago, after besieging the city and its suburbs for several months.

On Friday, federal police raised the Iraqi national flag above the city council building, according to a military statement cited by state television. Counter Terrorism Force personnel also entered the area surrounding the Falluja General Hospital and tightened the siege on it, the statement added. “The liberation of the government compound, which is the main landmark in the city, symbolises the restoration of the state’s authority,” federal police chief Raed Shaker Jawdat was quoted as saying by AFP news agency. Mr Jawdat said government forces had met limited resistance as they advanced and were pursuing militants, who are thought to be regrouping in the west.

Earlier, troops and police pushed into other districts in the south and east of Falluja, including the industrial zone, police and military commanders said. “This operation was done with little resistance from Daesh,” Gen Saadi told AFP, using an Arabic acronym based on the previous name of IS. “There is a mass flight of Daesh to the west that explains this lack of resistance. There are only pockets of them left and we are hunting them down.”

There was no immediate information about the estimated 50,000 civilians trapped in Falluja in dire conditions and with little food or fresh water. IS militants are reported to have used residents as human shields to slow the advance of government forces and limit air strikes by a US-led coalition.

Several civilians have also been killed by militants while attempting to escape the city, including, on Monday, a two-year-old boy who was being carried by his mother. The UN says about 42,000 people have fled Falluja since the government offensive began on 23 May, although Medecins Sans Frontieres and the Norwegian Refugee Council (NRC) put the figure at closer to 30,000.

The NRC has warned its supplies of emergency aid for the displaced are running low.