Gerry Adams has told the Ballymurphy Inquest he was not a member of the IRA. 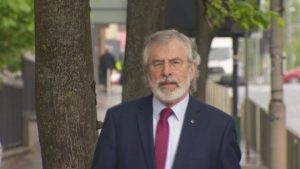 The inquest is looking into the shooting dead of 10 people in Ballymurphy, west Belfast, in 1971.

The Sinn Féin Louth TD said he believed that the Provisional IRA had decided not to engage the British Army well before civilians were shot and killed. He said that when internment began in August 1971 he was a Sinn Féin activist but did not have direct knowledge of the Provisional IRA’s actions.

The shootings occurred amid disturbances sparked by the introduction of internment without trial in Northern Ireland.

Mr Adams, who is now 70, is giving evidence on the 55th day of hearings at the inquest into the shooting of 10 people – including a Catholic priest and a mother of eight – between 9 and 11 August 1971. He said he did not witness any of the killings.

Asked directly about his connections to the IRA by a barrister for the coroner, Mr Adams said: “I was not a member of the IRA, I have never disassociated myself with the IRA, and I never will, until the day I die.

“I would’ve been in a minority,” he told the court. “The military tendency within republicanism was the dominant tendency.” He said he had no direct knowledge of what the Provisional IRA had done on the days of the Ballymurphy shootings, but had heard a lot of rumours and hearsay. He said he understood and believed that the IRA had returned fire earlier on 9 August 1971, but had disengaged in the mid afternoon, some hours before six people were later fatally shot.

Joan Connolly, Noel Phillips, Joseph Murphy and Daniel Teggart were fatally shot in the Manse field opposite the Henry Taggart Army base.

Mr Adams said of the killings: “The British government opted for the military option and reneged on its political responsibilities, and handed it over to the generals. “The generals did what generals do. The paratroopers were ordered to pacify and subdue and kill the enemy, and the enemy in this case were the decent people of Ballymurphy. ” He added: “It is hardly surprising that the Provisional IRA came into the ascendancy fairly quickly.”

In 1971, Mr Adams lived at 11 Divismore Park, opposite the Henry Taggart Army base, but said that he had stopped staying there at night after armed men had come to the house in a separate incident.

He described staying over at Springhill Crescent nearby at the time the four fatal shootings took place at the Manse Field. He said he watched the rescue of 11-year-old Edward Butler after he had been shot trying to leave the field.

Edward Butler survived the incident despite serious injuries, and has testified at the inquest. But he said there was one other incident of the IRA opening fire.

Mr Adams said that after Edward Butler was rescued, he saw two masked IRA volunteers with rifles running up Springhill Crescent past him and others, and passing out of sight. He said he believed they then fired their weapons, possibly at the Springmartin area. He later clarified that he had seen the two masked IRA volunteers go past during the rescue of Eddie Butler and thought they had been there to provide what he called “covering fire”.

Later Gerry Adams was asked about IRA membership by a barrister for the Ministry of Defence, and he repeated his denial. He further denied that he had taken over as an IRA commander after a previous commander died in November 1969.

Mr Adams was asked at length about articles by journalists over the decades and when he queried this line of questioning at one point, there was applause from the public gallery.

Eventually the coroner, Mrs Justice Keegan, asked that questions specifically refer to events at Ballymurphy in 1971.

Mr Adams later appealed for anyone with any information to assist the inquest. Mr Adams is continuing to give evidence.