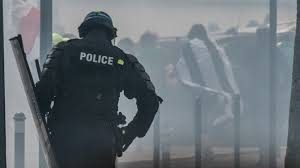 festival and a man aged 24 disappeared.

Fourteen people were rescued from the River Loire after falling in during the police crackdown, witnesses say.

Steve Maia Caniço was last seen in the early hours of Saturday and friends say he went missing when police intervened.

Witnesses say police fired tear gas and rubber bullets as they tried to bring an end to a night of techno music.

Footage was shared on social media showing police carrying batons and riot shields moving in on the bank of the Loire.
The free techno party was organised as part of France’s Fête de la Musique (Music Day). The annual event encourages people to play music in public places every 21 June.

Police intervened to end the Nantes party when it failed to end in the early hours of Saturday morning, saying the music “had exceeded the set time”.

There was no barrier along the river and a number of revellers fell in, before they were rescued by firefighters.

“It was a party and some people did not want to go back home at the end as far as we know,” a police official told the BBC.

The official was not allowed to give further comment about the incident, but confirmed that France’s police disciplinary body was investigating the event.

Police in the Loire-Atlantique department appealed (in French) for information about missing partygoer Mr Maia Caniço.

Friends have told French media outlets that he could not swim, while witnesses have described seeing a man struggling on the surface of the water.

“He did not go home, he did not go to work. His mobile is off. He had to go to a festival in the Netherlands next weekend, it was close to his heart. Something is wrong,” a friend told newspaper 20 Minutes.