The US has approved arms sales to Taiwan worth around $1.8bn (£1.4bn), in a move that is likely to increase tensions with China. 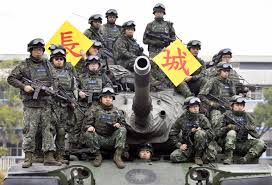 The Pentagon said the deal comprised three weapons systems, including rocket launchers, sensors and artillery. Taiwan, which considers itself a country, is seen as a renegade province by China.

Tensions have increased in recent years and Beijing has not ruled out the use of force to take the island back.

Last week, US national security adviser Robert O’Brien said that while he did not believe China was ready to invade Taiwan, the island needed to “fortify itself” for the future. Taiwan’s defence ministry said the weapons would help it “build credible combat capabilities and strengthen the development of asymmetric warfare”.

The deal includes 135 precision-guided cruise missiles, as well as mobile light rocket launchers and air reconnaissance pods that can be attached to fighter jets. Under President Donald Trump, the US has sold significantly more weapons to Taiwan than before.

The island has also been seeking backing from the current administration, which, unlike its predecessors, seems willing to challenge the delicate balance Washington has maintained for decades with China and Taiwan, says our correspondent.

China’s Foreign Ministry says the arms deal would likely have a major impact on its relationship with the US and that it would respond as necessary, according to Reuters news agency. In recent months, the US has been intensifying its outreach to Taiwan. In August, the highest-ranking US politician to visit Taiwan in decades met the island’s president, Tsai Ing-wen. Beijing strongly criticised the meeting, warning the US “not to send any wrong signals to ‘Taiwan independence’ elements to avoid severe damage to China-US relations”.

China has also stepped up military drills that it presents domestically as rehearsals for a future invasion of Taiwan, though experts say a conflict is not imminent.

While the US does sell Taiwan arms, and has an implicit security guarantee, it does not have a formal defence treaty with Taiwan as it does with Japan, South Korea and the Philippines.

China and Taiwan were divided during a civil war in the 1940s but Beijing insists the island will be reclaimed at some point, by force if necessary. Tensions have risen in recent years with the election of Ms Tsai as Taiwan’s president, seen as an opponent of Beijing.