A man who slit the throat of a 10-year-old boy as part of a string of random attacks has been jailed for life. 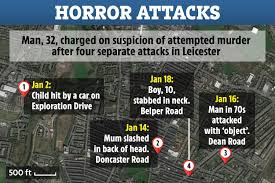 Carlos Vinodchandra Racitalal, 33, targeted victims unprovoked at various locations in Leicester, his trial heard. He drove into a five-year-old girl and attacked a mother, who was with her two young children, and a lone shopper.

The judge said it was no exaggeration to say the 10-year-old boy “came within millimetres of death”.

Racitalal, formerly of Finsbury Road, was convicted of attempted murder on Thursday and sentenced earlier to 21 years at Leicester Crown Court.

Judge Mr Justice Thomas Linden QC said the offences “clearly demonstrate” he was dangerous. He said: “You armed yourself with a weapon in at least three of theses cases, went out and identified vulnerable members of the public to attack.”

The court heard on 2 January the defendant drove into the back of the five-year-old girl in an Asda car park off Abbey Lane. Twelve days later, on 14 January, he attacked a woman as she walked home with her children, aged three and six, and stabbed her in the back of the head. In a further attack on 16 January, he targeted a man who was on his way home after a shopping trip.

Prosecutors said the final attack on the 10-year-old on 18 January left him with a 10cm (4in) deep gash to his neck. The court heard Racitalal handed himself in two days later after CCTV of the attacks was released on social media. The judge added: “Your attacks were random in the sense they were without any reason, still less provocation. “It is also clear that your methods were likely to result in death as you intended, or very serious injury. It was only through luck rather then judgement that you did not achieve your objectives.”

He added: “You are one of the more frightening types of offender from the point of view of the public, and particularly vulnerable members of the public, in that they will have no inkling of what is about to happen and therefore no opportunity to take evasive action. “An additional concern is your apparent lack of insight into what you have done.”

Mr Justice Linden added a psychiatric report of Racitalal was “unable to identify any psychiatric or other disorder which accounts for your actions or your professed inability to recall the attacks”.

Andrew Baxter from the Crown Prosecution Service said: “This was a series of senseless, unprovoked attacks targeting elderly people and young children. “The level of violence used is deeply disturbing and is one of the most shocking cases I have overseen for some time. Each one of these victims has been through a terrifying ordeal and it is down to fortune and the intervention of others nearby that all of them survived.”

Racitalal was found guilty of four counts of attempted murder and one count of causing grievous bodily harm.

Jurors also convicted him of three counts of possession of a bladed article, one of attempted grievous bodily harm and one of dangerous driving.