A 15-year-old boy has died after being attacked in a residential street by a group of youths “armed with knives”. 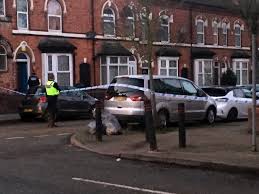 Police said Keon Lincoln was “set upon” at about 15:30 GMT on Thursday on Linwood Road, in Handsworth, Birmingham, and died later in hospital.

The attackers fled in a car which crashed into a house a short distance away, added police, who said they had since seized the vehicle. A 14-year-old boy has been arrested on suspicion of murder and is in custody.

The investigation is progressing “at pace”, according to the West Midlands force, which detained the suspect on Friday morning. Witnesses who reported the carrying of knives to officers also said shots were heard.

Police confirmed earlier Keon was attacked with weapons but did not specify which sort. “The death of Keon has shocked the whole community,” said Det Ch Insp Alastair Orencas, who is leading the murder inquiry. “This level of violence in broad daylight on a residential street is inconceivable, let alone the fact the target was a 15-year-old boy.”

He reiterated that Keon, who lived locally, died “in the most violent circumstances” and said the family, who were being supported by specialist officers, “had the worst shock imaginable”.

In a statement from the family, who said they were “devastated” by their loss, the schoolboy was remembered as “fun-loving” and “full of life and love”. The tribute added: “He had an infectious laugh that lit up the room whenever he was in it.”

Those who know the attackers’ identity are urged by police to contact the force.

Meanwhile, detectives are examining a white car they believe to be the getaway vehicle which crashed into a house on Wheeler Street.
Police have not disclosed the nature of Keon’s injuries. Before a post-mortem examination takes place, they say they are unable to say how he died.

CCTV footage has been seized and the area is cordoned off while investigations continue.

Local Labour MP, Khalid Mahmood, described the boy’s death as “extremely tragic” and “a needless thing to have happened”. He said: “We must work with police as much as we can to stop this happening again.”