The psychologist behind the UK’s main deradicalisation programme for terror offenders says it can never be certain that attackers have been “cured”. 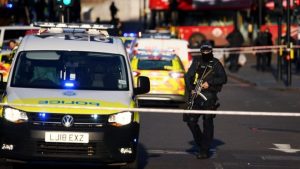 Khan, 28, was shot dead by police. He was jailed eight years ago for planning to set up a terrorism training camp – but appeared to be responding to rehabilitation by the time of his release in December 2018.

In the attack in November he killed Jack Merritt, 25, and Saskia Jones, 23, at a prisoner rehabilitation event in Fishmongers’ Hall in the City of London.

The HII scheme involves the offender attending repeated sessions with a psychologist who encourages them to talk about their motivations, beliefs, identity and relationships with both other extremists and the rest of society. The aim, forensic psychologist Mr Dean said, is to find ways to get the offender to think deeply about what they really want from life – and this can lead them to voluntarily abandoning extremism and violence.