A suspected suicide bomber has died after detonating a device near the US consulate in the Saudi Arabian city of Jeddah, the interior ministry says. 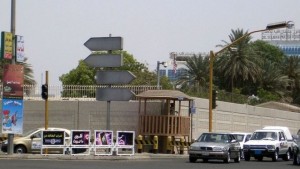 Two security officers were slightly injured as they tackled the man, but no one else was hurt. The attack came in the early hours of US Independence Day and shortly before dawn prayers marking the start of the daily Ramadan fast.

The US State Department said it was aware of Monday’s blast, adding that it “can confirm that all personnel under chief of mission authority are accounted for at this time”. Security guards became suspicious of a man in the car park of the Dr Suleiman Faqeeh hospital around 02:15 (23:15 GMT Sunday), interior ministry spokesman Maj-Gen Mansour al-Turki said in a statement. The hospital is opposite the US consulate. As the guards approached the man, “he blew himself up with a suicide belt inside the hospital parking,” the statement said.

The US embassy in Saudi Arabia issued a warning after the attack, urging Americans to “remain aware of their surroundings, and take extra precautions when travelling throughout the country”.

The authorities in Kuwait say they have thwarted three planned attacks by so-called Islamic State (IS), including a plot to blow up a Shia mosque. 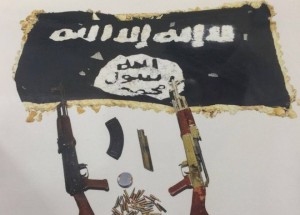 An interior ministry statement said security agencies had arrested five Kuwaitis and an Asian in a series of raids inside Kuwait and abroad. Those held include a woman and her son, who were living between Syria and Iraq.

Last year, a Saudi suicide bomber killed 27 people when he blew himself up inside a Shia mosque in Kuwait City. At least one man has been sentenced to death in connection with the attack, which IS said it was behind.

The interior ministry statement, which was published overnight, did not mention when the raids to foil the alleged plots took place.

One of those held was named as Talal Naif Raja, an 18-year-old who the statement said was planning to bomb a Shia mosque and an interior ministry facility. He allegedly told investigators that he had received instructions from a leading IS figure abroad, and that he had planned to carry out the attacks at the end of the Islamic holy month of Ramadan on Tuesday or during the festival of Eid al-Fitr. The second cell comprised 52-year-old Hessa Abdullah Mohammad and her 28-year-old son, Ali Mohammed Omar, who were arrested near the Syria-Iraq border and brought back to Kuwait, according to the statement. The third cell was made up of four men, three of whom were seized along with two rifles, ammunition and an IS flag, it added.

The statement said one of the suspects – Abdullah Mubarak Mohammed, 24 – worked for the interior ministry and that another was a citizen of an Asian country. The fourth member of the cell, a Gulf national, is still at large.

The number of people killed in Sunday’s suicide bomb attack in the Iraqi capital, Baghdad, has risen to 165, interior ministry officials say. 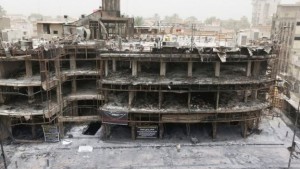 The government has declared three days of mourning after the huge blast, which injured 225 others.

A lorry packed with explosives was detonated in the Karrada district while families were shopping for the holiday marking the end of Ramadan. It is believed to be the deadliest single bomb attack in Iraq since 2007.

Rescuers said whole families had been killed. Many people were badly burned. So-called Islamic State (IS) has said it carried out the suicide attack.

Prime Minister Haider al-Abadi was greeted by angry crowds when he visited the mainly Shia Muslim area in the hours after the bombing. His office said Mr Abadi understood the reaction of residents and would increase security by banning “magic wand” fake bomb detectors and improving vehicle inspections at roads into the city.

The fake bomb detectors, some based on cheap devices for finding golf balls, were sold in large numbers to Iraq by fraudsters. One British businessman, who was jailed for 10 years, sold more than 6,000 devices to Iraq for up to $40,000 (£30,000) each. The UK banned their export to Iraq in 2010 and several other fraudsters received prison sentences. Despite warnings that the devices were useless, the Iraqi security forces continued to use them.

In a statement on the Karrada attack, the Iraqi justice ministry said (in Arabic) that a group of prisoners convicted of terrorist crimes would be put to death in the immediate future.