Two people have been stabbed in Manchester city centre. 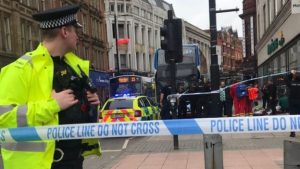 Officers were called to reports of an assault near Morrisons supermarket in Piccadilly Gardens at 12:10 GMT.

One man has been taken to hospital with injuries not thought to be life threatening and another was treated at the scene for minor injuries, a police spokesperson said. The force added it was thought to be a “targeted attack” and there was no threat to the wider community. No arrests have yet been made.

Eyewitness Gemma Hepworth, 36, said there was “blood everywhere”. “I came out and there were two men on the floor. Morrisons staff were coming out with bandages, and people were asking if we knew anyone who could perform first aid.

“I offered my scarf and everyone was trying to help. Some people were crying.”

A number of road closures are in place and members of the public have been asked to avoid the area.

All Stagecoach bus services travelling through Oldham Street have been diverted, the operator said.

North West Ambulance Service was alerted at 12:08 and sent 10 vehicles and crew to the scene.