Two FBI agents have been killed and three others have been wounded during a shootout in Florida while serving an arrest warrant, according to the FBI. 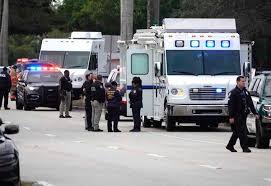 The gunfire began around 06:00 local time (11:00GMT) in the city of Sunrise as agents were investigating a child abuse case, US officials say. The suspect has also been killed. Asked how many bullets were fired, a police official replied: “Too many to count.”

The gunfight took place at an upscale gated community north of Miami.

“A team of law enforcement officers were there to execute a federal court-ordered search warrant in furtherance of a violent crimes against children case,” a statement from the FBI said. The statement added that two of the agents had been transported to hospital and were in a stable condition. The deceased agents have not yet been named.