A number of people have been stabbed and a man has been shot dead by police in an attack at London Bridge. 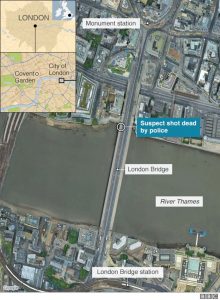 The Met Police has declared the stabbing attack a terrorist incident. The suspect, who died at the scene, was believed to have been wearing a hoax explosive device, police said.

A BBC reporter at the scene said he had seen a fight on the bridge, with several men attacking one man. Police then arrived quickly and a number of shots were fired at him, he said.

Details are still emerging, but police said they were called to a stabbing at a premises near the bridge just before 14:00. Footage has emerged on social media showing the apparent suspect appearing to be shot by police as he lay on the ground.

Another man in a suit and jacket could be seen running from him, having apparently retrieved a large knife.

British Transport Police said London Bridge station was currently closed and no trains would be stopping there.

Police have advised people near the scene to follow directions from officers on the ground. The prime minister tweeted he was being updated on the incident and wanted to thank police and all emergency services for their response.

He is returning to Downing Street from his constituency.

Home Secretary Priti Patel also tweeted that she was “very concerned” about the incident.

Labour leader Jeremy Corbyn tweeted that the reports from London Bridge were “shocking” and his thoughts were with those who were caught up in the incident.

McManus said: “Just a few minutes ago I was walking across London Bridge on the south bank to the north bank of the bridge. “There appeared to be a fight going on on the other side of the bridge, with several men attacking one man. “Police then quickly arrived, including armed police, and then a number of shots were fired at this man.”

Amanda Hunter, who was on a bus on London Bridge at the time, said: “All of a sudden [it] stopped and there was some commotion and I looked out the window and I just saw these three police officers going over to a man… “It seemed like there was something in his hand, I’m not 100% sure. But then one of the police officers shot him.”

Noa Bodner, who is stuck in a restaurant on London Bridge, said: “There was a rush of people coming in and everybody basically dived under the tables. “We were told to keep away from the windows, people that came from the outside were saying that shots were fired.”

She said the manager ran to lock the doors and staff told people to move away from the front of the restaurant. She said the mood was “calm”, “some people seem a bit distressed, but they’re being looked after by friends or staff”.