Four boys and a girl have been arrested on suspicion of conspiracy to commit murder after a 13-year-old boy was stabbed to death in Reading. 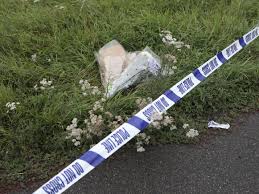 Officers were called just before 16:00 GMT on Sunday following reports of an attack in Bugs Bottom fields, Emmer Green. The boy was pronounced dead at the scene and police are appealing for witnesses to come forward.

The five teenagers, all aged 13 or 14, remain in police custody.

Thames Valley Police said the boy’s next of kin had been informed, but no formal identification had taken place.

A “considerable police presence” would be in place for several days, the force added.

Det Supt Kevin Brown said: “This is a tragic and shocking incident which has resulted in the death of a young boy. “We have specially trained family liaison officers supporting the boy’s family and the thoughts of all of us within the force are with them at this extremely distressing time.”

Highdown School and Sixth Form Centre said it was “reeling from the tragic news”.

In a statement, head teacher Rachel Cave said: “This student was part of our community and many students and staff knew him well. “For a life to be ended at such a young age is a total tragedy. Our thoughts and prayers are with his family.”

The school, in Emmer Green, said it was arranging counselling support for students and setting up an electronic book of condolence.

Officers are appealing for anyone who was in the area between 15:00 and 16:30 on Sunday who might have taken photos or camera footage to contact them if they notice anything suspicious. Det Supt Brown said he believed there would have been witnesses to the “dreadful incident” as the area is popular with dog walkers.

A man said his wife was walking their dog through the park on Sunday afternoon when she saw a boy on the ground with several people around him trying to give him first aid. Another dog walker said she saw a group of young people standing in the woods in Bugs Bottom fields at about 15:30 and described it as “slightly unusual”.