A 17-year-old has been stabbed to death and three others were injured as two groups clashed in Manchester. 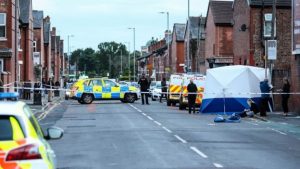 Police were called to a disturbance in Henbury Street, Moss Side, at about 19:30 BST.

The boy was pronounced dead at the scene, while three others were stabbed. Their injuries are not thought to be life-threatening.