A Royal Marine who died in hospital following an incident in training has been named as Ethan Jones. 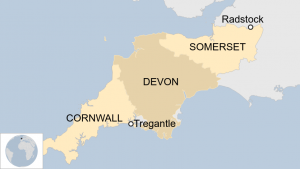 He was part of a group practising an assault from a landing craft on Tregantle beach, Cornwall, when he went under the water on 21 January.

The 20-year-old was taken to hospital where he died on Friday. The Royal Navy is investigating the incident. His family said: “Ethan died fulfilling his dream and doing something he loved.”

They continued: “Joining the Royal Marines was something Ethan had wanted to do for as long as we can remember. He wanted to join the best of the best and challenge himself.

“Ethan loved the outdoor lifestyle and was looking forward to serving as a Marine on operations around the world. We are very proud of all that he achieved.”

Mr Jones was born in Bath and lived in Westfield, Radstock. He had joined the Royal Marines in May and was in the last phase of the 32 weeks training. His inquest opened at Plymouth Coroner’s Court earlier and heard he exited a landing craft and was submerged in sea water for about five minutes. He was given treatment at Derriford Hospital where scans showed he had a brain injury and minimal brain activity.

“As an example, during an exercise, the troop were fatigued, yet Jones took it upon himself to place his equipment down at the top of a hill, go back down and carry the kit of a fellow recruit who was struggling with an injury. “He is a true loss to the Royal Marines as he would have inevitably achieved much within his career.”

Fellow Recruit Daniel Landrey said: “He was our best mate and we know he would not want this much fuss made of him. “Lucky for him it does not take more than a few words to describe Jonesy. When he didn’t have a pasty in his hand, he was getting the job done. No complaining, no fuss, just always sending it.”

During training he had been selected as a recruit section commander and was awarded the Commando Medal, which is voted for by recruits for the individual who best personifies the Commando Spirit.