The US has extended the New Start nuclear arms control treaty with Russia for five years. 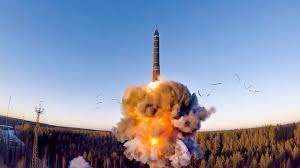 Announcing the move, Secretary of State Antony Blinken said it made the world safer.

President Joe Biden and his Russian counterpart Vladimir Putin reportedly discussed it by phone a week ago, and Mr Putin signed it into law on Friday.

The treaty had been set to lapse on 5 February, as the Trump administration had refused to approve the extension. It had sought tougher verification procedures and some inclusion of tactical weapons, as well as an expansion of the deal to cover China.

New Start is the last remaining nuclear arms deal between Russia and the US, and its demise would have ended all limits on deployments of strategic nuclear warheads and delivery systems.

“The 5-year extension of New START makes the United States and the world safer,” Mr Blinken tweeted. “This welcome step is the start of our efforts to pursue effective arms control that lowers the risks of war and helps prevent arms races.”

A Russian foreign ministry statement said the agreement entered into force on Wednesday after diplomatic notes were exchanged with the US Embassy in Moscow, adding that the treaty remained in effect “exactly as it had been signed, without any amendments or additions”.