Mexico’s former security minister Genaro García Luna has pleaded not guilty to charges linking him to the Sinaloa drugs cartel. 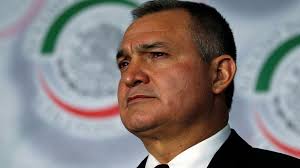 Mr García Luna, 52, denied engaging in a continuing criminal enterprise in a court in New York. Prosecutors accuse him of allowing the Sinaloa cartel of “El Chapo” Guzmán to operate freely in Mexico in exchange for millions of dollars in bribes.

Mr García Luna was Mexico’s top security chief from 2006 to 2012. During his time in office, he founded Mexico’s federal police force.

The latest charges accuse him of engaging in a continuing criminal enterprise which had allowed the Sinaloa cartel to operate with impunity in Mexico for more than a decade in exchange for multimillion-dollar bribes. They include allegations that Mr García Luna was involved in “offenses involving the importation and the distribution of massive quantities of dangerous drugs into the United States”.

Prosecutors allege that between 2001 and 2012, Mr García Luna received millions of dollars in bribes from the Sinaloa cartel in exchange for providing protection for its drug trafficking activities. They accuse him abusing his position to give Sinaloa cartel drug shipments safe passage, of warning the cartel of planned law enforcement operations and of providing it with information about its rivals. They also allege that he placed other corrupt officials into positions of power in areas where the Sinaloa cartel was active.

Mr García Luna has pleaded not guilty to all the charges brought against him. Mr García Luna was a powerful figure in the cabinet of President Felipe Calderón. But even before he was named security minister, Mr García Luna held influential positions in the security forces. He led the Federal Investigation Agency from 2001 to 2006.

In 2011, he presided over the International Drug Enforcement Conference, which was held in Mexico.

His arrest in the US in December 2019 caused shockwaves in Mexico. However, it was not entirely unexpected after Mr García Luna was named in the trial against the leader of the Sinaloa cartel, Joaquín “El Chapo” Guzmán.

A former member of the Sinaloa cartel Jesús “El Rey” (The King) Zambada who gave evidence against “El Chapo” said that he had personally delivered two suitcases containing million of dollars in bribes to Mr García Luna in a restaurant.

If found guilty, Mr García Luna could face a maximum sentence of life imprisonment. The next hearing has been scheduled for 7 December. The judge overseeing the case sentenced “El Chapo” Guzmán to life in prison.