A man has appeared in court charged with the attempted murder of a hospital worker who was stabbed in Brighton. 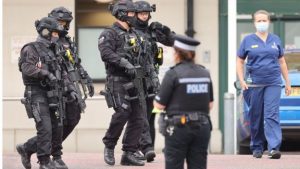 Connolly Mellon, 30, of Waterloo Street, Brighton, is accused of stabbing 56-year-old George Joseph at the Royal Sussex County Hospital. The hospital was put into lockdown after Mr Joseph was attacked at about 08:40 BST on Sunday. He was treated for stab wounds and later discharged.

Mr Mellon is also accused of possessing an offensive weapon in a public place.

Appearing at Brighton Magistrates’ Court, he entered no plea on both charges. He was remanded in custody and is due to appear at Lewes Crown Court on 17 August.

The court was told Mr Joseph had been treated for five stab wounds, including injuries to his arm, lip, throat and torso. Access to the hospital was restricted for much of the day as police conducted searches.

At 16:00 on Sunday, Brighton and Sussex University Hospitals NHS Trust tweeted the hospital was “running normally”. It thanked Sussex Police for a “rapid and professional response” and hospital staff “whose performance has been exemplary throughout”.