A man has been arrested in Bristol on suspicion of Islamist-related terrorism offences, police have said. 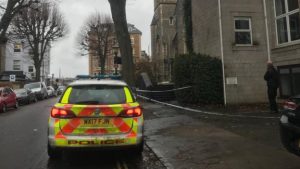 The 33-year-old was detained at 23:00 GMT on Monday as part of a planned operation at a flat in Tyndale Court, Imperial Road, in Clifton. The suspect is being held in custody while searches are carried out at the address.

Police said there was no risk to the public and the arrest was not linked to the London Bridge terror attack.

Head of CTPSE Det Ch Supt Kath Barnes said: “At around 23:00, counter-terrorism detectives arrested a man on suspicion of terrorism offences and are currently carrying out searches at a residential property in Bristol. “This was part of a pre-planned operation.”

Supt Andy Bennett, of Avon and Somerset Police, said there would be an “increased policing presence” in the area.

The building where the raid took place is owned by property company, People for Places.

A spokeswoman for the firm said it was “supporting” the police investigation. “Our customers’ safety and well-being are paramount and any customers who were directly affected by this incident are safe and being looked after,” she added. “As this matter is being managed by the police service we are not able to provide further details about the incident.”