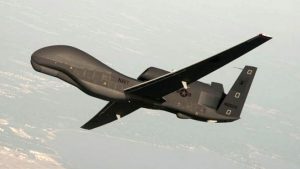 Iran’s Islamic Revolution Guards Corps (IRGC) said the aircraft had violated Iranian airspace, and that the incident sent a “clear message to America”.

But the US military insisted the drone had been over international waters at the time, and condemned what it called an “unprovoked attack” by the IRGC.

The incident comes at a time of escalating tension between the two countries.

On Monday, the US defence department said it was deploying 1,000 extra troops to the region in response to “hostile behaviour” by Iranian forces. It has already sent an aircraft carrier strike group and B-52 bombers.

The US has also accused Iran of attacking two oil tankers with mines last Thursday just outside the Strait of Hormuz, in the Gulf of Oman. Iran rejects the allegation.
It was the second time in a month tankers had been attacked close in the region, through which a fifth of the world’s oil passes each day.

Tensions were further fuelled on Monday when Iran announced its stockpile of low-enriched uranium would next week exceed limits it agreed with world powers under a landmark nuclear deal in 2015.

Iran stepped up its production in response to tightening economic sanctions from the US, which unilaterally withdrew from the deal last year.

May 2018: US President Donald Trump withdraws unilaterally from the 2015 nuclear deal between Iran and six world powers, and begins reinstating sanctions to force Iran to renegotiate the accord. Iran’s economy slumps as they take effect.

2 May 2019: Mr Trump steps up pressure on Tehran by ending exemptions from secondary sanctions for countries still buying Iranian oil.

5 May: The US sends an aircraft carrier strike group and B-52 bombers to the Gulf because of “troubling and escalatory indications” related to Iran.

8 May: Iranian President Hassan Rouhani says Iran will scale back its commitments under the nuclear deal in retaliation for the sanctions, including by allowing its stockpile of low-enriched uranium to increase. Enriched uranium is used to make reactor fuel and potentially nuclear weapons.

12 May: Four oil tankers are damaged by explosions off the UAE coast in the Gulf of Oman. The UAE says the blasts were caused by limpet mines planted by a “state actor”. The US blames Iran, but it denies the allegation.

17 June: Iran says it will breach the limit on its stockpile of enriched uranium set under the nuclear deal on 27 June, unless Europe protects Iranian oil sales.

20 June: Iranian forces shoot down US military drone over the Strait of Hormuz.