An attack on prison staff by two inmates with bladed weapons is being treated as a terror attack, the Metropolitan Police has confirmed. 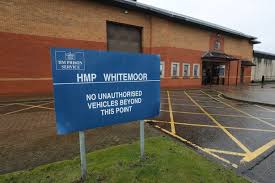 Four officers and a nurse were injured at HMP Whitemoor in March, Cambridgeshire, on Thursday.

One attacker is understood to be Brusthom Ziamani, 24, found guilty of preparing an act of terrorism in 2015.

All five staff have since been released from hospital and the Met’s Counter Terrorism Command is investigating. One officer at the maximum security jail sustained serious stab injuries to his head, face and back when he was attacked from behind by the two inmates wearing fake suicide belts and using improvised weapons, POA general secretary Steve Gillan said.

“There is no doubt in my mind that but for the bravery of staff, then this morning we could have been talking about a death of a prison officer at Whitemoor Prison,” he added.

The officer was attacked as the cells were being unlocked on Thursday morning. He was set upon from behind and the inmates attempted to force him into a storage cupboard he was unlocking. The other four members of staff were hurt when they tried to help their colleague. They were two male prison officers, one female officer and a prison nurse.

One officer was stabbed in the hand and the others received facial injuries, according to Mr Gillan. All five were treated in hospital but have since been discharged. Shouts of “Allahu Akbar” (God is the greatest) were reportedly heard during the attack.

Prime Minister Boris Johnson has spoken of the attack on Twitter, saying: “My thoughts are with the prison staff who were injured in the suspected terrorist incident at HMP Whitemoor and I would like to thank them, and the emergency services, for their courageous response. “We owe those who keep us safe a huge debt of gratitude.”
Ziamani, understood to be one of those responsible, was jailed in 2015 for planning to behead a soldier.

In the prison attack, he was assisted by another inmate, a Muslim convert who was serving time for a violent offence.

The Met said that “due to the circumstances relating to this incident, it was deemed appropriate for the investigation to be carried out by officers from the Met Police Counter Terrorism Command”.

Deputy Assistant Commissioner Dean Haydon, senior national co-ordinator for Counter Terrorism Policing (CTP), has confirmed the matter is being treated as a terror attack. The force said there was “nothing to suggest any continuing threat inside or outside of the prison system linked to yesterday’s incident”.

No arrests have yet been made.

HMP Whitemoor houses more than 400 Category A and B prisoners on three wings, including a number of the highest-risk inmates. In February last year, a “small number” of prison staff there needed medical treatment after violence broke out.