A terminal at London’s Heathrow Airport was evacuated due to “a potentially suspicious item”, the airport said. 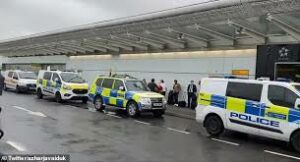 Passengers reported on social media that they had been told to leave Terminal 2 shortly before 13:00 BST amid a large police presence.

A spokesperson for the airport said they had been evacuated “as a precaution” but the item was found to “not pose a safety risk”.

Operations at the airport “are now back to normal”, the spokesperson said.

They added: “We thank those passengers whose journeys were temporarily disrupted for their patience.”