France has temporarily pulled out of a Nato security operation amid a major row with Turkey. 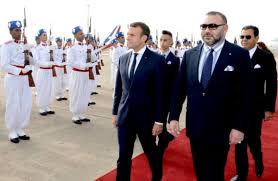 The defence ministry said France had suspended its role in Operation Sea Guardian, accusing Turkey of violating an arms embargo against Libya. It comes weeks after Turkish ships allegedly targeted a French warship in the Mediterranean – something Ankara strongly denies.

The Nato allies are thought to support different sides in Libya’s civil war. Riven by violence since Col Muammar Gaddafi was deposed by Nato-backed forces in 2011, the oil-rich nation is a key transit point for migrants heading to Europe from Africa. Currently, the UN-backed Government of National Accord (GNA) is battling against the forces of Gen Khalifa Haftar which control large parts of the east and south of Libya.

French relations with Turkey have become increasingly strained in recent months because of the Libya crisis, Turkey’s role in northern Syria, and also drilling in the eastern Mediterranean.

But the key incident came on 10 June, when French frigate Courbet went to inspect a Tanzanian-flagged cargo ship, Cirkin, off the coast of Libya, to check if it was smuggling arms. At the time the French ship was taking part in Nato’s Operation Sea Guardian, which among other things maintains freedom of navigation and plays a “maritime counter-terrorism” role.

What happened next is still under dispute. According to French defence forces, Turkish ships escorting the Cirkin – which they said was carrying medical supplies – acted aggressively to the Courbet, and even targeted it with their weapons systems three times.

Turkey denies the French allegation, saying the interaction was friendly. France has since asked Nato to investigate the incident. Both countries have traded insults in recent weeks. On Monday, French President Emmanuel Macron accused Turkey of “historic and criminal responsibility” in the Libyan conflict, “for a country which claims to be a Nato member”.

Turkey’s foreign minister, Mevlut Cavusoglu, said on Tuesday that France had been “destructive” in the North African nation, and accused the country of trying “to increase Russia’s presence in Libya”. On Thursday, he asked France to apologise for its allegations about the Courbet.

Now France has suspended its role in Operation Sea Guardian. “It doesn’t make sense to keep our assets… with allies who do not respect the embargo,” a French defence official reportedly said.