A man is in custody after a stabbing and robbery spree that left four people dead and two injured across several crime scenes in Southern California. 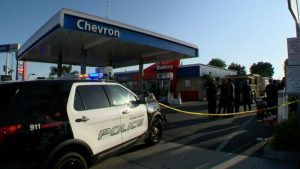 Police told US media the violence appeared to be random, with the only known motives for the two-hour rampage as “robbery, hate, homicide”. “We know this guy was full of anger and he harmed a lot of people,” said Garden Grove Police Lt Carl Whitney.

Authorities have not yet named the suspect, a 33-year-old male.

The attacks come just days after the country was shaken by a pair of mass shootings in El Paso, Texas, and Dayton, Ohio, that left 31 people dead. The stabbing spree took place across more than six locations over approximately two hours in Garden Grove and neighbouring Santa Ana, about 35 miles (56km) southeast of Los Angeles.

The suspect was armed with “two very large machete-type knives”, Lt Whitney said at a news conference following the attacks. “He was very brutal when he attacked his victims.”

The victims included two people at the suspect’s apartment building, a 7-Eleven security guard and one person at a Subway restaurant.

The attacks began at around 16:00 PST (00:00 BST), when local police received a call from two people who reported their apartment robbed, US media report. Another call came in shortly after, reporting a burglary at a bakery in Garden Grove.

From the bakery, police said, the suspect returned to his apartment complex nearby, where he fatally stabbed two people after an alleged altercation. Around 18:00 PST, the suspect allegedly drove to a gas station where he attacked a man pumping gas, nearly severing the victim’s nose off his face.

Detectives tracked the suspect’s car to the parking lot of a 7-Eleven convenience store in Santa Ana. The man came out of the store shortly after, carrying a large knife and a gun he had taken from the 7-Eleven security guard. Upon his arrest, police were informed the man allegedly had also killed a male employee of a nearby Subway restaurant. He also allegedly robbed an insurance business, where an employee was stabbed several times, as well as a cheque-cashing business.

“Multiple scenes going on at the same time,” Lt Whitney said, according to CNN. “I’ve worked here for 30 years. This is the first time I’ve ever seen something like this where we have a suspect kill four people in one day and attack other people that are just innocent victims. It’s pure evil.” The suspect was caught on surveillance cameras at several different locations. “We have video showing him attacking these people and conducting these murders,” Lt Whitney added.

The two people injured in the attacks are now in a stable condition. Police said the crimes have “nothing to do” with race, noting that the suspect and most of the victims are Hispanic.