Fourteen villages have been evacuated and a motorway closed after a huge blaze at an ammunitions depot south-east of the Russian capital, Moscow. 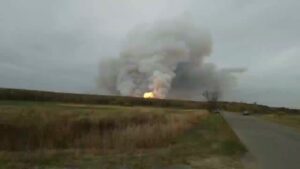 At least six people have been injured, with five requiring hospital treatment.

The depot in the Ryazan region is reportedly used to store missiles and other artillery munitions. The site caught fire on Wednesday after flames spread from burning grasslands, officials said. A state of emergency has been declared in the region.

The emergency services reported a string of explosions from the depot site – coming every five to ten seconds – shortly after the fire broke out at about 13:40 local time (10:40 GMT). In footage shared by Russian media, loud bangs can be heard as columns of thick smoke rise above the site.

At least 1,600 people – some media outlets put the figure at more than 2,000 – within a 5km (three-mile) radius of the depot were evacuated. “All measures were taken to evacuate people,” regional governor Nikolay Lyubimov said, according to Russia’s Ria news agency.

About 70 firefighters were sent to the scene to extinguish the flames. The fire was later said to be under control. “The worst is over,” Mr Lyubimov said.

Last year, more than 9,500 people had to be evacuated after a blaze broke out at an ammunition dump in Siberia. Ten large Il-76 cargo planes and five Mi-8 helicopters were called in to water-bomb the area, near the town of Achinsk in the Krasnoyarsk region.