The PM has said the Iran nuclear deal should be replaced with a “Trump deal”. 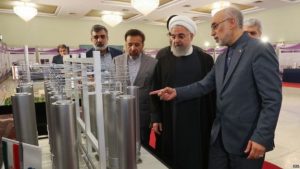 Boris Johnson said he recognised US concerns the 2015 deal was “flawed”, but there had to be a way of stopping Tehran from acquiring nuclear weapons.

“If we’re going to get rid of it then we need a replacement,” he said. “Let’s replace it with the Trump deal.”

His comments came as the UK, France and Germany triggered a dispute mechanism in the deal after violations by Iran. There are growing fears for the future of the 2015 Joint Comprehensive Plan of Action (JCPOA), which was abandoned by the US in 2018.

Iran has suspended all limits on its production of enriched uranium, which can be used to make reactor fuel but also nuclear weapons. It has said it is responding to sanctions reinstated by the US.

In a joint statement, the three European powers said Iran was not “meeting its commitments” and it was referring the issue to the body which enforced the agreement to try and ensure Tehran returned to compliance as soon as possible.

“We do this in good faith with the overarching objective of preserving the JCPOA,” it added.

President Trump has described the JCPOA as the worst deal ever negotiated, but speaking to the BBC, Mr Johnson suggested the UK would remain committed to it until the agreement was changed. “From the American perspective, it’s a flawed deal… plus it was negotiated by President Obama,” the PM said. “Let’s replace it with the Trump deal. That’s what we need to see. President Trump is a great dealmaker by his own account, and by many others. “Let’s work together to replace the JCPOA and get the Trump deal instead.”

In a Commons statement later, Foreign Secretary Dominic Raab accused Iran of “systematic non-compliance”. However, he said the UK and its European allies remained “committed to the deal”, adding: “We are triggering the DRM [dispute resolution mechanism] to reinforce the diplomatic track, not abandon it.”

Shadow foreign secretary Emily Thornberry, though, suggested the prime minister and the foreign secretary were “not exactly on the same page”. She asked whether it was the government’s official policy to replace the JCPOA with a “Trump agreement”, adding: “If that is not official government policy – why did the PM say it?”

Mr Raab insisted the UK position was clear and the PM supported the deal. “Of course you can want to preserve this deal but be ambitious that it’s possible to bring in the United Sates and Tehran into a broader rapprochement… “That’s the policy that we’re pursuing.”

The JCPOA was now in a kind of limbo – abandoned or largely abandoned by its two most important signatories, the US and Iran. In invoking the dispute mechanism, he said the Europeans were taking the first formal step towards writing its obituary. The PM defended the UK’s response to the US killing of Iranian general Qasem Soleimani, saying there was no reasons for it be informed in advance and it had played its “traditional role” in working with Washington and Europe to de-escalate tensions. He said he was pleased that Iran had admitted to a “terrible error” in shooting down a Ukrainian passenger jet, killing all those on board.

In a wide-ranging interview with Breakfast’s Dan Walker – his first major TV interview since the election – the PM also said he was “very, very, very confident” about the UK and EU negotiating a new trade deal by the 31 December deadline.

While, in any negotiation, a country had “to budget for a complete failure of common sense”, he believed a successful outcome was “enormously likely”. He also said the government was continuing to look at whether Big Ben would chime at the moment that Brexit happens at 23.00 GMT on 31 January – and crowdfunding could be a way to pay for it.

On domestic matters, the PM was asked what he would do to address the record waiting times in A&E departments in December, with 400,000 people having to wait more than four hours to be treated, many of them on trolleys and in corridors. Mr Johnson said the health service would get an extra £34bn in funding over the next four years, with 50,000 more nurses and 6,000 new GPs. “I also want to see improvements in performance, in A&E and in waiting times, across the country. We are going to be working on this flat out.”

But he asked for patience when it came to another huge issue – finding an affordable solution to the provision of social care for the elderly.

When he first entered Downing Street in July, he suggested he had a plan to fix the problem once and for all, but the Conservative manifesto only committed to urgent cross-party talks.He insisted new proposals would be published this year but it might take the whole Parliament – which is scheduled to last more than four years – for them to come into force because of the complexity of the issue. “This has been shirked by governments for about 30 years,” he said. “This is potentially a massive change and we have to get it right… There are quite a lot of important moral and social issues contained in it. “Should taxpayers being paying for people who might be able to afford it…? Should families be looking after their elderly relatives?”