The FBI has warned of possible armed protests across the US as Trump supporters and far-right groups call for demonstrations before Joe Biden is sworn in as president. 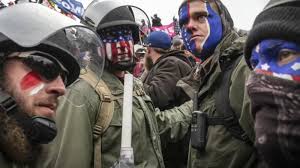 There are reports of armed groups planning to gather at all 50 state capitols and in Washington DC in the run-up to his 20 January inauguration.

Security will be tight for the event after a pro-Trump mob stormed Congress.

House Democrats say a vote to impeach the president will happen on Wednesday. They accuse President Trump of “incitement of insurrection” and say the vote will be held unless Vice-President Mike Pence invokes constitutional powers to remove Mr Trump from office. There is no sign Mr Pence is prepared to do so.

Mr Biden and Vice-President-elect Kamala Harris are expected to be sworn in at a ceremony at the Capitol. The Biden team had already urged Americans to avoid travelling to the capital because of the Covid-19 pandemic, a call that is now being repeated by local authorities.

Security officials have said there will be no repeat of the breach seen on 6 January, when thousands of pro-Trump supporters were able to break into the building where members of Congress were voting to certify the election result. Five people died in the riot, which happened after Mr Trump repeated unsubstantiated claims of fraud in the November vote and encouraged his supporters to march on the Capitol.

Since then, calls for Mr Trump’s resignation, removal from office or impeachment have grown among Democrats and some Republicans. Mr Trump has made no public statements since he was banned from several social media platforms – including Twitter – on Friday. He became the third US president to be impeached in December 2019 over charges of breaking the law by asking Ukraine to investigate his rival in the presidential election. The Senate cleared him.

Posts on pro-Trump and far-right online networks have called for protests on a number of dates, including armed demonstrations in cities across the country on 17 January and a march in Washington DC on inauguration day itself.

An internal FBI bulletin, reported by ABC News and other outlets, carries a warning that one group is calling for the “storming” of state, local and federal courthouses around the country if Mr Trump is removed from office early and on inauguration day if he is not. Although the violence at the US Capitol dominated headlines last week, similar smaller incidents were also reported elsewhere in the country. Local police agencies have been told by federal law enforcement to increase security at statehouses, according to US media.

FBI warnings are in place for all state capitals from 16 to 20 January itself and in Washington DC at least three days before the inauguration.

Companies and social media networks are cracking down against users and websites seen to be encouraging violence, including social network Parler, which said it was suing Amazon for removing it from its web hosting service.

Twitter said it had suspended more than 70,000 accounts that promoted the Q-Anon conspiracy theory while Facebook said it was banning any content that refers to Stop the Steal, a slogan associated with Mr Trump’s claim the election was rigged.