There have been 200 air strikes on opposition-held territory in northern Syria in the last three days, mainly targeting civilians, the US has said. 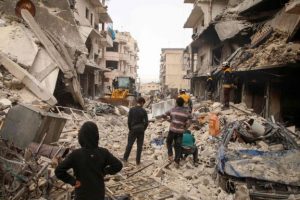 In one of the latest raids, 11 civilians were killed in reported Russian air strikes near a bakery and a clinic in the town of Ariha.

Russia denied its forces were involved.Fighting in Idlib, the last stronghold of the opposition to President Bashar al-Assad, has intensified in recent weeks as the Syrian army pressed on with an offensive.

On Wednesday, soldiers captured the strategically important town of Maarat al-Numan, which straddles a highway linking the capital Damascus with Aleppo. Now the soldiers have pushed further north, towards Ariha and Saraqeb.

“Every single day there is bombing. If a day passes without us hearing any missiles, any aircraft, any warplanes, we are afraid that they are preparing for something bigger than this,” an English teacher in the east of the opposition enclave said.

“People feel fear, angry, hopeless, helpless. It’s not only the bombing. It’s the cold… the high prices, the living expenses,” he added. “We live day by day… We don’t think about tomorrow.” Mr Jeffrey said the Syrian army’s advance meant that 700,000 already displaced people were on the move once again towards the Turkish border, which he warned could “create an international crisis”.

The UN said earlier on Wednesday that almost 390,000 people – around 80% of them women and children – had fled their homes since 1 December.

Another 400,000 people were displaced between April and August. The latest displacement is severely exacerbating shelter and accommodation shortages in the region, which is home to some 3 million people.

Conditions on the ground have been further exacerbated by extreme winter weather, including flooding and freezing temperatures, and rising fuel prices.